https://www.theborneopost.com/2021/08/09/experts-slow-start-to-vaccination-programme-new-variants-behind-current-surge-in-covid-19-cases/
NATION
POSTED ON AUGUST 9, 2021, MONDAY AT 8:16 AM 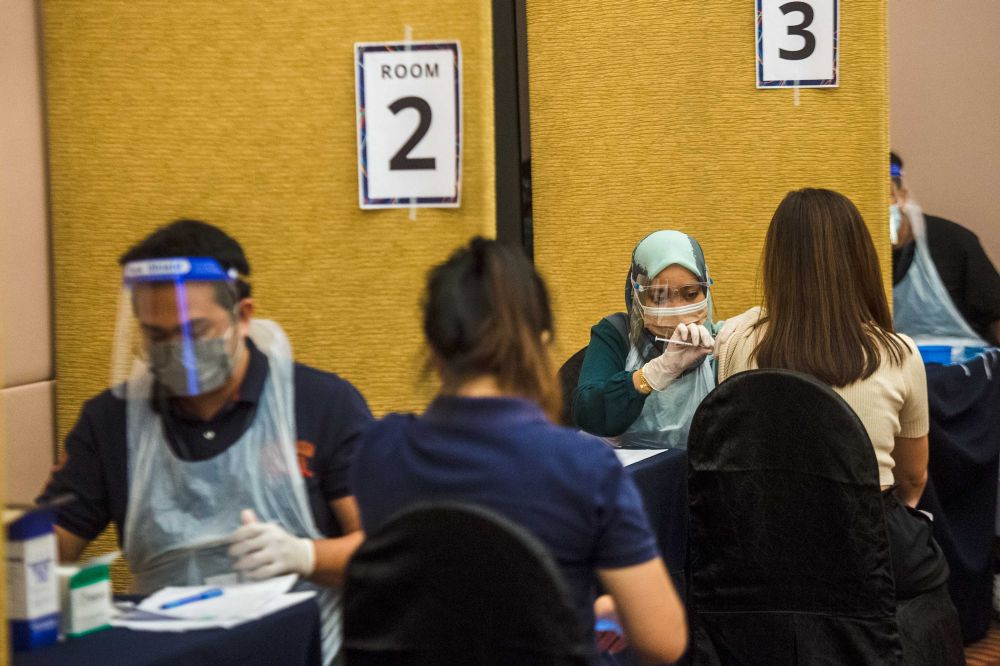 Even as the country achieved one of the fastest vaccination rates in the world, partly due to the Ops Surge Capacity focused on inoculating the Klang Valley population, infectious disease and public health doctors who spoke to Malay Mail agreed the increase in infections were consequences of the earlier delays in the vaccination scheme.

This delay, they said, has left a large group of the unvaccinated population susceptible to infection and who could eventually become Category-Three to Category-Five patients, which would in turn burden the public healthcare system.

Despite administering more than 2.4 million Covid-19 jabs in the first five days of August, and averaging more than 400,000 vaccine shots per day in July, such impressive statistics have been eclipsed by the 90,434 new cases and 995 deaths already reported over the same five days.

While vaccination efforts under the NIP have intensified, Universiti Sains Malaysia (USM) virologist Professor Dr Yahya Mat Arip told Malay Mail it would be some time before the benefits from the programme are felt.

He said data showed that the majority, almost 70 per cent, of new infections comprised those not vaccinated and most notably among those aged 18 to 40, who were only eligible for vaccination in the last phase of the NIP.

As for the situation in the Klang Valley, where more than 60 per cent of new cases are consistently being detected, Dr Yahya said factors such as NIP’s slow initial rollout and widespread sporadic infections within densely populated areas could be the main factors.

“A combination of widespread infections, where sporadic infections in the community exceed 80 per cent, high population areas, and previously low vaccination rate all contributed to the current situation.

“Yes, vaccination efforts have intensified in the Klang Valley, and now we are playing catch-up. It would take some time before vaccinations would catch up with the sporadic infections which have had a head start,” he told Malay Mail.

Dr Sanjay Rampal, a professor of epidemiology and public health medicine specialist at Universiti Malaya, also agreed those who remain unvaccinated remain the most vulnerable and a potential strain on the healthcare system, saying the real benefits of the NIP would only be felt two weeks after a majority of the adult population have received their second dose.

He said the positive effects from the NIP would only be felt two weeks after a majority of the adult population have received their second dose, and how this meant it could take up to 12 weeks to see case numbers start dipping, both in the Klang Valley and the rest of the country.

“Though a decrease in infections is expected by the end of August, we may have to wait for September to October to realise the full benefits of the immunisation programme in the Klang Valley.

“The effect of the immunisation programme and its benefit is directly proportional to the proportion of the population that completes both doses,” he told Malay Mail when contacted.

The Covid-19 Vaccine Supply Access Guarantee Special Committee (JKJAV) disclosed on August 6 that 6.1 million residents in the Klang Valley have received at least one dose, representing 99.6 per cent of the adult population.

Immunopathology specialist and president of Sunway University, Prof Dr Sibrandes Poppema, said the current surge in cases could have come from the large number of undocumented foreigners that have yet to be vaccinated.

“This will hopefully be remedied by having walk-in vaccination centres and, as I would suggest, vaccination (centre) setups at the factories,” he said.

Dr Poppema concurred that the unvaccinated remain vulnerable despite the rise in vaccinations, pointing out that even the fully vaccinated were still able to be infected and pass on Covid-19.

He noted that while almost 100 per cent of the adult population in Klang Valley have received at least one dose, it was the number of those fully vaccinated that mattered most.

“This is especially the case with the two dominant variants of the virus in Klang Valley, which are the Beta and Delta variants,” he said.

However, Dr Poppema saw positives from how most of the new cases reported were those with either mild or asymptomatic.

“Despite all of these factors it is also clear from the figures that the vast majority, more than 98 per cent, of the positive tests is in individuals with no or mild symptoms and this is likely to be a first positive effect of the vaccinations,” he points out.

Malaysian Medical Association (MMA) president Prof Datuk Dr Subramaniam Muniandy said contact tracing and isolation could be have been quicker to avoid the virus festering within the community, a point also raised by the head of Sunway University’s Centre for Virus and Vaccine Research Prof Dr Poh Chit Laa.

Dr Subramaniam then added on to Dr Poppema’s point, saying a large number of even the documented migrant worker population here remains unvaccinated and will continue to be a source of new infections until they are immunised.

“It is a known fact that there have been recurring infections in this group. There are an estimated two to three million undocumented workers in the country therefore an important group to vaccinate.

“We are still not prioritising vaccinations for construction workers and as such, clusters are forming,” he asserted.

Dr Subramaniam also told Malay Mail the current surge in cases came as no surprise with community transmissions still rampant even before the series of lockdowns was imposed.

“Even during the lockdown, people are still going out and meeting with others. It doesn’t help that politicians too are having large gatherings,” he said.

UM’s Dr Sanjay then said other non-clinical factors which could have caused the surge include ineffective movement restrictions such as police roadblocks, which he said were futile in curbing the spread with a continuous increase in community transmissions

“Once we have vaccinated a sufficiently large population, it may be time to de-emphasise the use of daily reported cases for calibrating the standard operating procedures (SOP) in the Klang Valley Area,” he suggested.

Dr Subramaniam was on the same page when he said a large part of society was also not disciplined in observing SOPs, backing his assertion by pointing out the hundreds of individuals being fined for flouting regulations daily.

“Not wearing facemasks properly is one that we commonly see which can easily expose people to the virus,” said Dr Subramaniam.

The programme averaged around 22,000 to 24,000 doses per day at the initial stages in February until April, with the rate increasing in May to an average of 50,334 daily shots that month.

Up to August 6, a total of 23.6 million doses have been administered including 15.3 million first doses and 8.3 million who have received their second dose.