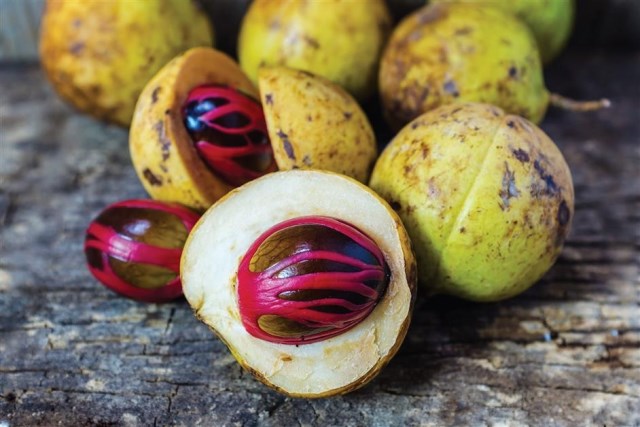 THE NUTMEG IS one of the most widely cultivated fruits in Penang, using an area of more than 50 hectares. Despite its ubiquity, the nutmeg, or Myristica fragrans, is not native to Penang or even Malaysia, but rather to the Maluku Islands of Indonesia. The plant was only introduced at the end of the 18th century, during the Napoleonic War in Europe, and has contributed significantly to the local economy since.

The nutmeg is an evergreen plant that can grow up to 20m tall (Photo 1) and is able to bear fruit for 60 years, producing up to 2,000 fruits per year. Environments conducive for its cultivation include warm and humid climates with 150cm of annual precipitation. It thrives especially when planted at high altitudes (1,300m above sea level).

Nutmegs are cultivated using a planting technique called polyculture, which sees two or more types of crops planted in the same field. In Penang farmers tend to plant nutmegs and durians together so that small-scale farmers do not depend on one sole crop produce for their income. In addition to reducing the cost of fertilisers and pesticides, polyculture also enhances the biodiversity of organisms such as pollinators like birds and insects, as well as microorganisms in the soil which promote soil fertility and plant growth.

Being dioecious plants, nutmeg trees have distinct male and female individual organisms, and although both genders can produce fruits, male trees produce less compared to female trees. While theoretically, growers may plant only female trees to prompt higher production, in reality however, it is difficult to differentiate the gender of the tree at the seedling stage – most can only be determined after they bloom. Hence, the probability of getting 50% of the same gender in one field is high.

Most of the younger generation are familiar with the nutmeg in its pickled or shredded form. One often sees these sold at the Chowrasta Market for example, but the fruit as a whole may not be recognisable to many. Nutmeg fruits look similar to peaches, but of pale yellow or brown colour, and the outer surface is smooth. Upon maturity, the fruit splits across the pre-existing central line, exposing its three main parts: the rind, seed and mace (a red aril net-like structure covering the seed)

The nutmeg rind is usually pickled, dried to make shredded nutmeg, or processed into juice. The seed and mace are usually used for making ointments and as a culinary spice in order to make full use of its aromatic properties. Laboratory tests conducted on the seed oil have documented several antimicrobial activities against human pathogenic bacteria, such as Escherichia coli, Bacillus subtilis and Staphylococcus aureus; and shows inhibitive effects on plant pathogenic fungi as well, such as the Aspergillus niger and Phomopsis species.

During a visit to several nutmeg fields in Penang, led by Dr. Hafizi Rosli from the School of Biological Sciences at Universiti Sains Malaysia (USM), fruits were found that had brown sunken lesions, some with black dots, on the surface – this is a sure sign of infection.

This disease, known as fruit rot, begins with small circular lesions that can enlarge and darken with time, and as its name suggests, will eventually cause the fruit to rot (Photo 3). It is a common disease that also afflicts other local fruit crops such as mangoes, papayas, bananas and guavas as well as temperate fruits such as apples, oranges and grapes.

While the disease can be caused by both bacteria and fungi, preliminary tests at USM suggest the source of infection to be from at least two different fungal species that are potentially pathogenic and are able to cause fruit rot on nutmegs. One of the fungi has a greyish cottony surface (thread-like mycelial growth) with black dots at the back of the Petri plate. Under the microscope, this fungus produces oval-shaped microscopic spores (Photo 4).

The other fungus has a whitish cottony surface without black dots and the microscopic spores are more elongated (Photo 5). Subsequent laboratory work at USM will involve DNA analysis of the fungi to identify the species. To confirm that these fungi are the main culprits of fruit rot, they will also be inoculated into healthy nutmeg fruits to see if the observed disease symptoms in the field can be reproduced.

To our knowledge, this is the first study conducted of fruit rot on nutmeg in Malaysia. Similar studies have been conducted in India and in Indonesia. For example, research has been done in India on Neofusicoccum parvum which causes leaf spots, Lasiodiplodia theobromae and Colletotrichum gloeosporioides which cause fruit rot, and Phytophthora species which leads to leaf fall of nutmeg trees.

In Indonesia Lasiodiplodia theobromae was found to be associated with dieback disease (progressive death of twigs and branches) in nutmegs. Similarities between the aforementioned fungal pathogens with the fungal species isolated in USM’s preliminary study were observed, but additional tests will still have to be conducted before it can be concluded that these fungi are the causing agents of fruit rot of nutmegs in Malaysia.

Some of the documented fungal pathogens have also been found to produce mycotoxins, secondary metabolites produced by fungi to assist the infection. Mycotoxin production is initiated when several factors, such as fungal strains, temperature and substrates on which the fungi are growing, are at optimum levels.

There is no proven connection yet between the fungi USM isolated from the diseased nutmegs, and such ability. However, similar fungi from different crops have been known to produce toxic metabolites, such as Lasiodiplodia theobromae isolated from coconut trees and a human patient, as well as Neofusicoccum parvum from grapes. To date, there is no clear evidence of the effects of these mycotoxins on humans or other animals.

Since infected fruits can harbour microscopic spores that infect neighbouring healthy fruits, they have to be removed upon detection from the trees. Collecting and burning the rotten fruits on the ground will also minimise the infection in the field. Some farmers also spray a 1% Bordeaux mixture of copper sulphate and slaked lime to prevent infection.

This study on disease in nutmegs was done as an appreciation of the fruit and its future as a highly popular specialty fruit crop in Penang. It is hoped that the present research will pave the way for greater understanding of the various diseases that plague its cultivation, and form effective disease control practices to help local growers optimise nutmeg production.