PEOPLE of a certain age and generation like me probably grew up reciting English nursery rhymes that took us into the world of Jack and Jill, Humpty Dumpty and Little Bo-Peep.

However, it was only recently that I was made aware of the translated version of these nursery rhymes into Malay by A.W. Hamilton, when a copy was given to us by the late Dr Russell Jones, an expert on Malay manuscripts and Malay language.

Another copy was gifted to our grandson last year by my Danish friend, Ruth Iversen Rollitt, whose son received it while in Malaysia in 1966.

It sounds convoluted but it serves as a preview to the story about the journey of a Malaysian researcher, Dr Haslina Haroon, associate professor in translation studies at the School of Humanities, Universiti Sains Malaysia, Penang, in her quest to find the real Hamilton who embraced Malayness during his time in Malaya and Singapore from 1908 to 1932.

It is a story about how the book connects the people concerned. "It has been an amazing journey," said Haslina who used Hamilton's translated book of nursery rhymes to teach translation.

The curiosity had taken her to Britain, Singapore and Australia, physically and virtually, and each time with a discovery that could only be described as astounding. The author, Arthur Weddeburn Hamilton, was born in India in 1887 and had, in his lifetime, translated English nursery rhymes into Malay, the Rubaiyat Omar Khayyam, and wrote other books like Malay Made Easy, Easy Malay Vocabulary and Malay Proverbs.

He was also the author of a hilarious pantun in Malay and English called Esah Ronggeng, which displayed not only his keen observation of the Malay culture, but also his skills in the play of words in both English and Malay, as well as his sense of humour. But there's more to Hamilton that Haslina discovered that answered many questions.

Was he the "Haji" in the title of his book? Did he perform the haj? Her research showed that the man of words was, in fact, sent to Malaya as a police probation officer, then in Penang and rose to be police commissioner in Johor.

He had helped fight Siamese bandits in Kedah as well as dealt with the Tok Janggut rebellion in Kelantan in 1915.

"It is amazing. How did he have time to write and yet execute his duties asapolice officer?" said Haslina.

In her research, Haslina stumbled across a blog by the late Susan Abraham, who wrote about the book of nursery rhymes that she bought at Kinokuniya for RM650. In the comments section was a message from a Sarah T., who said she was researching her great grandfather's work, and wrote that Hamilton's granddaughter, her mother, used to tell her amazing stories about him and his adventures.

Another significant find was a comment by George Crowley in Sydney who, asa4-year-old, knew Hamilton as "Uncle Haji".

Hamilton was his parents' friend and had given him a copy of the Haji's Book of Malayan Nursery Rhymes on his 4th birthday in 1941. George also had copies of Malay pan tun, Rubaiyat of Omar Khayyam — a Malay version, which are now in the USM library as he wanted them to be of use to people studying literature.

It was when Haslina delved into Hamilton's work in Singapore, that she discovered his Malay side of the family are still alive and living in Singapore.

Recently, Haslina and USM hosted an online talk on "A.W. Hamilton and the Translation of English Nursery Rhymes into Malay", an event that brought not only enthusiasts and students of translation and rhymes, but also close family members of Hamilton — his granddaughter Sharifah Fauziyah Syed Hussain AlKaff and her daughter, Sarah Taleb Shardlow (Hamilton's great granddaughter).

Also present was George Crowley from Sydney, who is now 82. Sarah, in search of her family roots, was contacted by Khir Johari, collector and independent researcher on the history and culture of the Malay world, who told her about the talk by Haslina.

According to the family, Hamilton married Rogayah in Singapore in the early 20s, a brief marriage but they had a daughter together, Noresah Muhammad Zain/Zin. Zain was Hamilton's Muslim name. In their possession now is the 1947 edition of Haji's Book of Malayan Nursery Rhymes. A member of the Johor Royal family, Tunku Khadijah who visited London, met Hamilton in 1949.

Hamilton had sent a copy of his book through Tunku Khadijah with a message written in Jawi, signing his name a s Muhammad Zain. "Tunku Khadijah told my mum, your father still remembers you and loves you, that is why he gave you this book," recalled Fauziyah. Fauziyah, 72, sobbed when she recalled asking her mother (Nor) why she never contacted her father when he left for London.

According to Fauziyah, Nor, who was 89 when she died in 2014, was too scared to travel in search of her father. Brought up in a very strict family, she was not allowed to go out.

Fauziyah also asked her late grandmother, Tok Gayah, why they divorced and was told it was fated. Fauziyah grew up reading the book her grandfather gave to the family. It was also on loan to her primary school for a year. Sarah, who has now assigned herself with the task of researching her great grandfather's life, recalled her grandmother reading the nursery rhymes to her.

"She wrapped it in a cloth and kept it in between her clothes in the cupboard," she said. Apparently, Hamilton never performed the haj. He had only accompanied pilgrims on a ship in 1927 as far as Jeddah and wrote reports about the living condition on the ship.

He himself had written to say he was never a haji, but a title given to him because of the way he used to dress, with the ketayap on his head and sporting a white beard. Hamilton's translation of the English rhymes very much reflected the community in Malaya; Georgie Podgie became Awang Bawang, Taffy was a Welshman who became Ah Fi Orang China, and some rhymes reflecting his fluency in Tamil too.

Illustrations in the book by Nora Hamerton also reflected the multiracial community in Malaya. Haslina is still on her journey to discover more of Hamilton.

Just when she thought she came to a dead end,I offered her a lead with a bit of detective work and Google. We have now found Hamilton's great grandnephew! The journey continues. 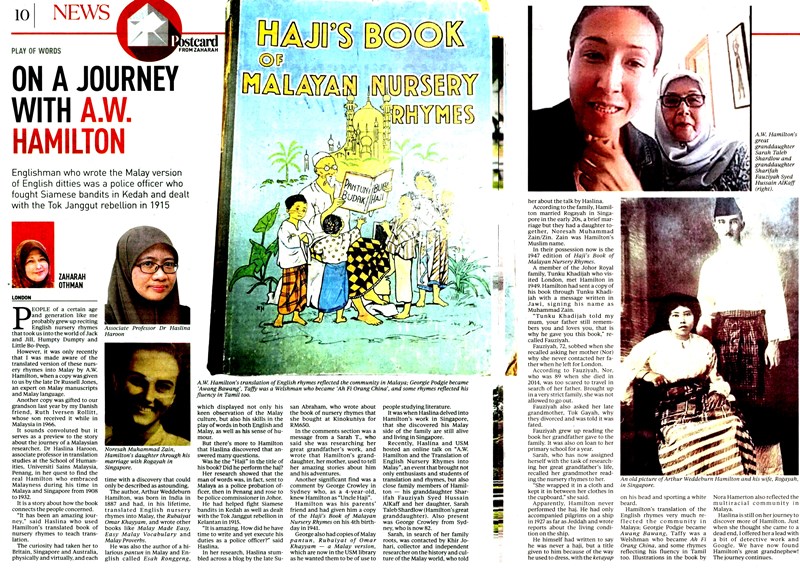