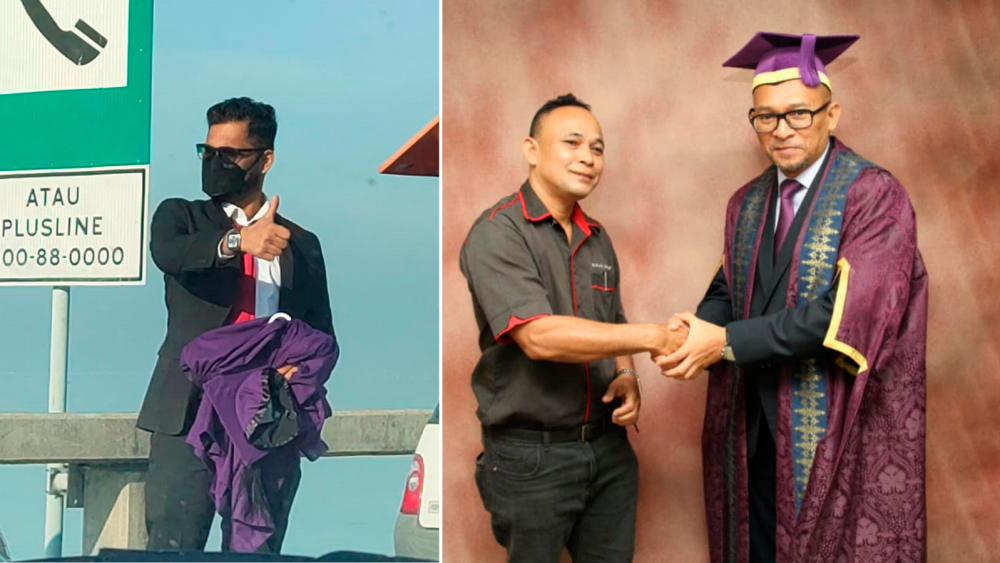 GEORGE TOWN: A cleaning service contractor, Ashri Haya, who was the saviour to give a ride to a Universiti Sains Malaysia (USM) graduate, R.Kevin received a special invitation from the university to attend the last day of its 59th convocation ceremony.

USM invited Ashri to Dewan Tuanku Syed Putra to express its heartfelt appreciation for rescuing Kevin from a massive traffic congestion on the Penang Bridge due to a fatal accident on May 24.

Ashri, 50, said he was touched by the recognition and did not expect his little help would mean a lot to so many parties, and in the incident, he was on his way to supervising cleaning works in USM.

“I saw the graduate was in desperate need of help as he tried to flag down motorcyclists for help. At that time, there was a massive congestion on the Penang Bridge due to a fatal accident.

“I noticed he was holding his graduation robe, similar to USM. So I gave him a lift as I sympathised and understood his situation,” he told reporters here today.

On May 24, a photo of Kevin holding his graduation robe while attempting to hitch a ride went viral on social media after he panicked about missing his convocation ceremony as his car was stuck on Penang Bridge due to the massive jam.

The post went viral on social media and received a lot of attention from netizens.

“Although his gesture seems small, his willingness to offer assistance at a time when another was in need should be emulated by others,“ he added.

In the meantime, the USM registrar, who is also USM’s 59th convocation ceremony working committee chairman, Datuk Dr Musa Ali, also expressed his appreciation and said the care and concern shown by Ashri had given an impact on society. - Bernama

-Source from The Sun Daily Online