The 28-year-old Sabahan wore a traditional Kadazan costume complete with accessories that weighed over four kilogrammes.

"Wearing traditional clothing may be common for students studying in Sabah or Sarawak because they have easy access to it.

"However, students studying in Peninsular Malaysia or abroad may find it difficult to wear such costumes because most traditional outfits are heavy, especially as some of the accessories are made from brass. There is also a high risk of them being lost or damaged during shipping and transportation.

"Furthermore, some traditional attire are not appropriate for graduation ceremonies because they contain bells. There are also outfits that might not adhere to the ceremony's dress etiquette because they are quite revealing," said Jonik in an email interview from Papar, a district located 40km from Kota Kinabalu, recently. Jonik feels youths should present the uniqueness of Sabah and Sarawak's traditional clothing not only during Gawai or Kaamatan festivals but at other significant occasions like graduation day as well. Photo: Universiti Sains Malaysia

Her parents, electrical officer Geoffrey Jonik, 60, and administrative officer Roza J. Anthony Mojigoh, 54, flew in from Kota Kinabalu for her graduation and brought the entire traditional ensemble for the auspicious event.

Jonik, who recently completed her studies in marine science and is currently pursuing her PhD in the same subject, decided to wear her traditional outfit because it represents her ethnic identity.

“The youth should present the uniqueness of Sabah and Sarawak's traditional clothing not only during Gawai or Kaamatan festivals but at other significant occasions like graduation day as well."

Her graduation outfit combined the Kadazan Papar blouse and Kadazan Penampang skirt because her father and mother are from Sabah's Papar and Penampang districts respectively. 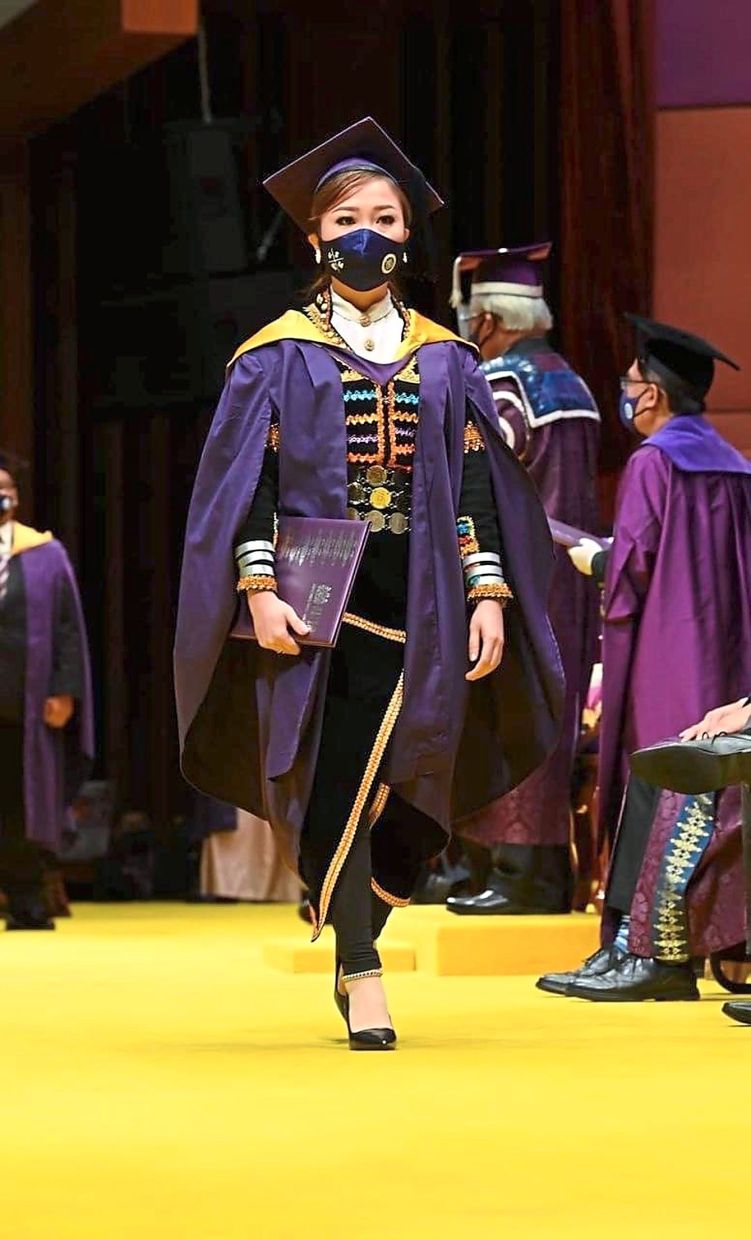 Kadazan Papar women wear a short velvet jacket with gold or silver buttons over a white blouse. Horizontal and vertical cross-stitched panels stitched with gold thread adorn the knee-length velvet skirt. The outfit worn by the Kadazan Penampang women looks similar, but it comprises a sleeveless blouse and long skirt.

"My intention in mixing and matching my costume from two different ethnicities was simply to respect the graduation dress code at USM. Hopefully it will not evoke any sensitivities among people, especially Sabahans," said Jonik, adding that the outfit has been in the family for five years.

Six years ago, Jonik wore her mother's traditional wedding attire during her convocation in USM when she received her degree.

"Each tribe's traditional dress has its sentimentality. I wore my mother's wedding costume because usually this traditional dress would be inherited from generation to generation. In 2014, my eldest sister Olivia Eyvonnie wore it to her graduation at Universiti Malaysia Sabah. Hopefully, after this, my youngest sister Maureen Grace will be able to wear it as well," said Jonik, who is the second child among four siblings. Jonik wore her mother's wedding outfit during her convocation in 2016.

"After my photo was shared on social media, I noticed that many young people in Sabah and Sarawak began to leave comments saying that they, too, wanted to wear traditional attire on their graduation day. It makes me very happy to be able to offer some inspiration."

She hopes more youth will embrace their culture and heritage.

"These days, some of the youth can barely speak or understand their native language. It is important for the younger generation to learn about traditional clothes-making methods, handicrafts and a variety of other skills. This is essential to preserve our cultural heritage."