PENANG, 21 May 2021 - Professor Dato’ Ir. Dr. Abdul Rahman Mohamed has been reappointed by the Ministry of Higher Education (MoHE) Malaysia as Universiti Sains Malaysia’s (USM) Deputy Vice-Chancellor of Research and Innovation (DVC R&I) for another two-year term, commencing 1 May 2021 to 30 April 2023. 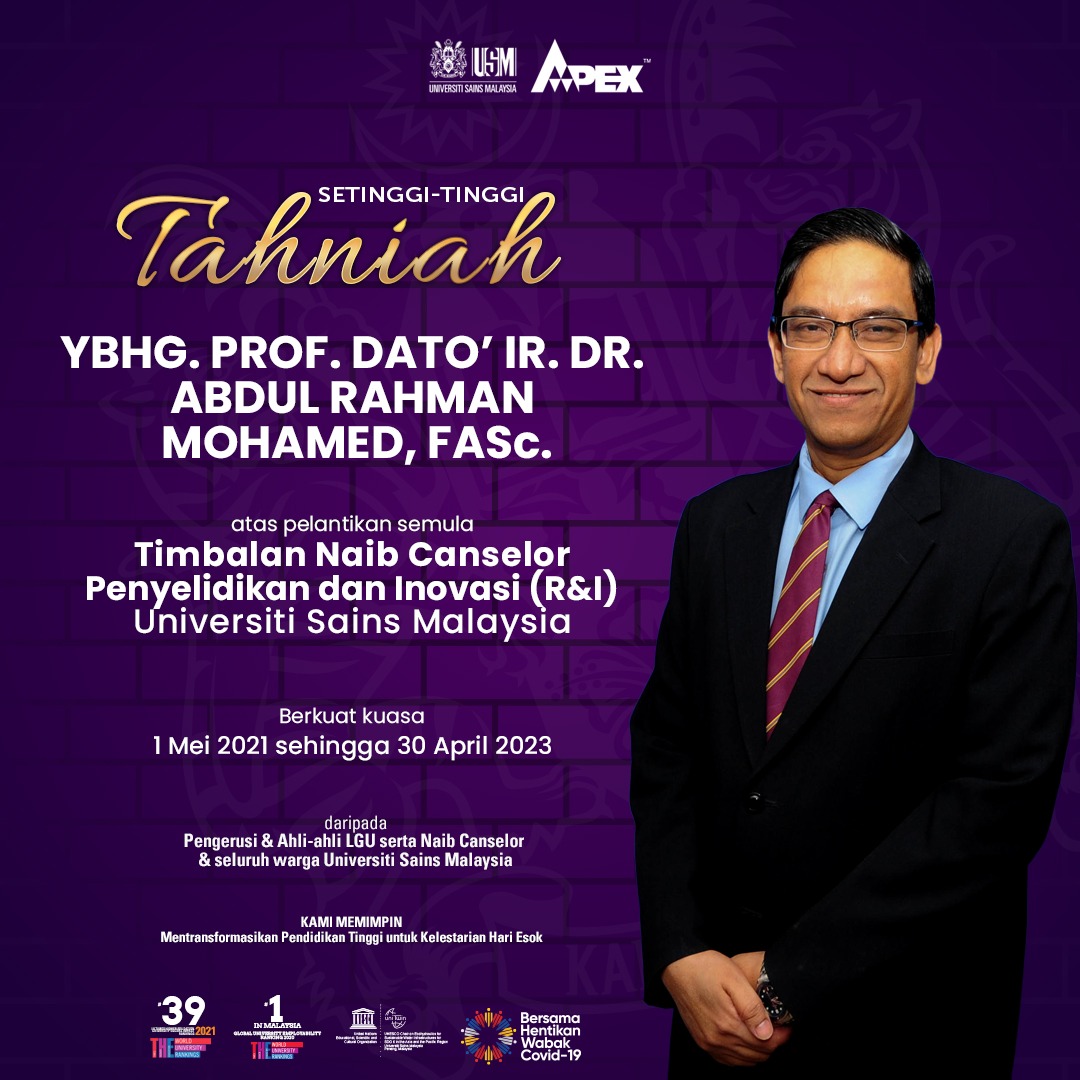 He first took over the position of DVC R&I on 1 May 2018, and prior to that he was the DVC of Industry and Community Network at USM.

Abdul Rahman, 57, who is also the Director of Sains@USM (Sciences and Arts Innovation Space), began his professional career as a lecturer at the USM School of Chemical Engineering in 1993, where he was one of the pioneers of the School and served as its Dean.

Based on his excellent research achievements, he has received more than 80 national/international awards, honours and recognitions, and with the most recent one being the Malaysia Highly Cited Researchers Award 2019/2020 by Clarivate Analytics.

Abdul Rahman expressed his heartfelt gratitude to the Minister of Higher Education, Datuk Seri Dr. Noraini Ahmad for reappointing him, and thanked the Higher Education Ministry for its continued trust and confidence in him.

He also thanked the Chairman of the University Board of Governors and Vice-Chancellor for their unwavering support and encouragement all this while.

“This reappointment means a lot to me and I will try my utmost best to continue to chart greater successes in the research, innovation and commercialisation of research findings of niche areas that USM is strong in, thus ensuring that USM continues to be a leading Research University (RU), not only in Malaysia but also globally,” he said.

Meanwhile, USM Vice-Chancellor, Professor Dr. Faisal Rafiq Mahamd Adikan who congratulated Abdul Rahman on his reappointment, said he believes that Abdul Rahman will continue to drive the university’s global research and innovation strategy, focusing on initiatives that will shape our future, drive innovations and create social and economic impact.

In 2020, USM fared exceptionally well in the Fundamental Research Grant Scheme (FRGS) 1/2020, where it recorded a marked increment in the number of applications, percentage of successful applications and quantum of grant received (RM23.8 million) as compared to the previous years, which puts USM among the highest among the universities in the country.

USM also produced the largest number of SCOPUS publications for Malaysia in 2020.

A special appreciation to Abdul Rahman and his team at the Division of Research & Innovation and Research Creativity & Management Office (RCMO) for providing all the necessary guidance and support, as well as the academics and researchers who had dedicated their time in pursuit of excellence in research and innovation.