USM KUBANG KERIAN, 28 February 2021 – The loss of a limb, whether since birth or due to an accident or illness will result in a person becoming disabled. Acquiring a prosthesis or artificial limb will be one way for the person to regain the functions of the lost limb.

Producing prosthetic limbs is a skill that is highly-sought nowadays. It’s not exactly a popular vocation as the process to produce a prosthetic limb is relatively long and complicated.

For Zolkifli Jusoh however, it is a process that is not difficult and impossible to do. 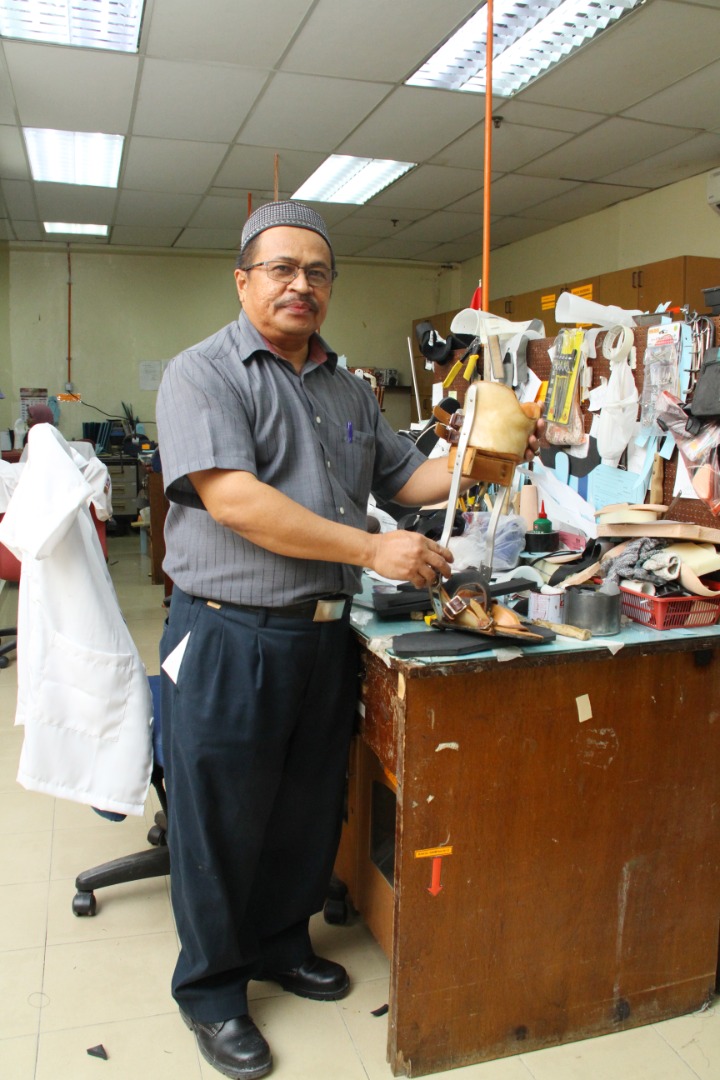 His interest and desire to help the less fortunate has pushed him to look into ways of making prosthetic legs and even sharing his skills with other staff in the unit.

For Zolkifli who has served for 35 years, he had never felt tired of making prosthetic legs for Hospital USM patients. He even considers each patient as being responsible for bringing him the opportunity to learn new knowledge in the manufacturing process of prosthetic legs.

“I get new knowledge whenever I evaluate patients, in order to apply the necessary production process for the prosthetic legs according to the patient’s suitability.

"Not only in terms of size and type of disability, but assessment is also made based on the patient's financial standing to fund the prosthetic legs, in addition to aiming to restore the image and self-confidence for them to continue with their lives," he said.

Zolkifli, who reported for work at Hospital USM as a Junior Medical Technician on 15 August 1985, was a Sijil Pelajaran Malaysia (SPM) school-leaver who did not have a foundation in the manufacturing aspects of prosthetic legs. That however did not deter him and he did not give up, slowly learning the ins-and-outs until he was highly-skilled in the field.

"I will usually start by making an assessment of the patient, recording information, taking measurements to build a mold, re-evaluating the patient's condition based on the mold made, assessing whether modifications are necessary to fit the size of the wearer, producing the final prosthesis up to the testing process on the wearer; all self-produced throughout at Hospital USM.

"The process of producing a prosthesis takes a long time, because precision is truly necessary for the prosthetic legs produced to have the best fit, not causing any pain or complications as well as to provide comfort to the wearer," Zolkifli commented further.

Zolkifli used his skills best to assist those less fortunate, especially the ones belonging to the asnaf (those who qualify under the ‘zakat’ programme) who need prosthetic legs.

“Alhamdulillah, many have benefitted from my skills and I feel happy seeing them smile after getting a prosthetic leg; some will even cry when they can walk and go to work again to support the family.

“Honestly, that is the satisfaction I feel, because in perfecting the limbs for those who need them and the God-given knowledge, I can assist my fellow human beings who are in need and I will continue to be involved in this field to produce more prosthetic foot innovations for the future,” he said.

Zolkifli's skills were recognised for the first time when he won the national-level MAMPU Innovation Award for a project entitled Special Artificial Limbs (APK) in the Innovative and Creative Group Convention (KIK) in 1997, where he participated together with his friends under the ‘ICC Perpaduan’ group. 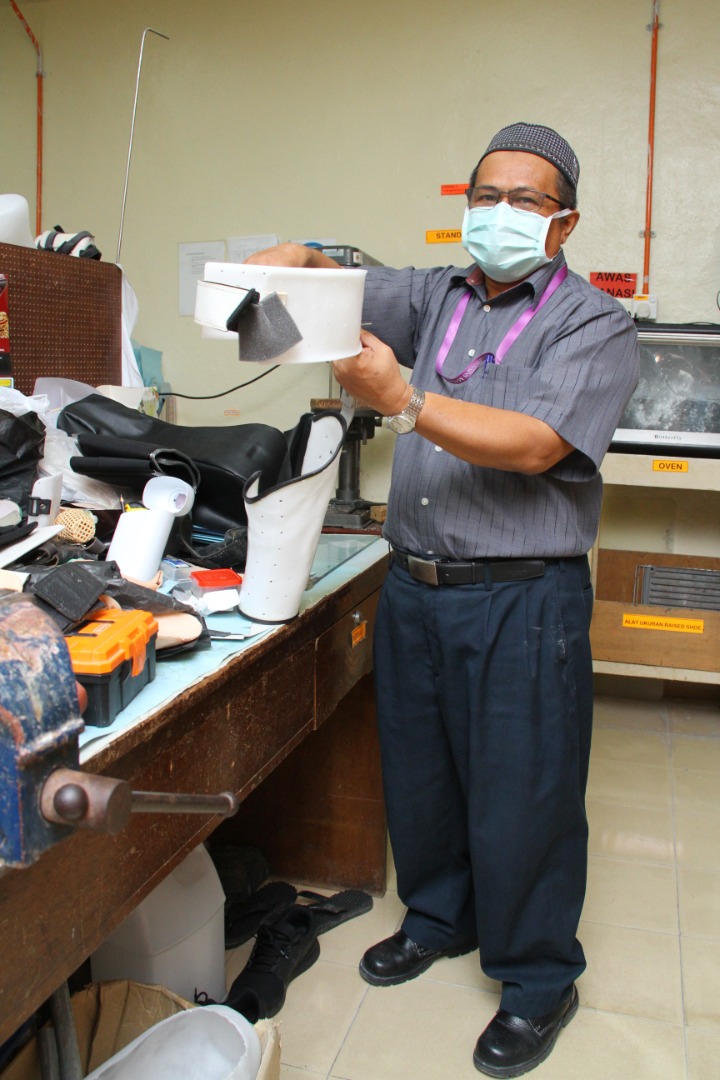 Armed with the experience and skills available, Zolkifli with the ‘Rehab Charger’ group members once again won the Gold Award at the Yokohama KIK Convention in Japan in 2011 with a three (3) stick in one (1) ‘Ezi Crutch’ project.

As a ‘veteran’ staff, Zolkifli is never stingy in sharing his knowledge and skills.

Currently, he has been given the mandate to manage and lead the Prosthetics and Orthotics Division at the Hospital USM Rehabilitation Medicine Unit. He will spend a lot of time there to provide guidance and instructions, and sharing the best techniques and methods to the new staff in making good prosthetic legs.

“I will share my knowledge and skills so that the new staff can continue the legacy to produce good prosthetic legs when I retire later.

"I hope that the field of prosthetics and orthotics will continue to grow accordingly with the latest technological advances as I believe that so far the prosthetic legs produced in Hospital USM are the cheapest in the local market,” he explained.

Telling about an unforgettable and wonderful experience throughout serving in the Hospital USM Prosthetics and Orthotics Division, Zolkifli who is about to retire at the end of April 2021 said, the spirit of camaraderie and friendship among the staff, regardless of salary grades in performing a task entrusted, will always remain intact in his heart.

“I am ready to share the skills and expertise I have wholly in producing a prosthesis with the younger staff if called upon, even after my retirement later.

"Knowledge is to be shared, not to be kept alone to oneself," he said, ending the interview session.