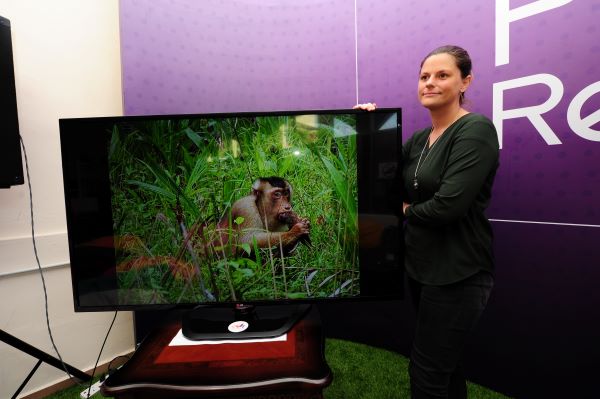 USM PENANG, 27 October 2019 – The presence of pig-tailed macaques would normally be associated with the kind of animals having destructive and uncontrolled behaviour. However, macaques undeniably have a distinct role in maintaining the ecosystem, more specifically as nature's pest controllers.

The phenomenon, which has thrilled a group of scientists, showed that macaques, known in science as Macaca nemestrina, could support and sustain the palm oil industry with their voracious appetite for rats which are known to cause damage to oil palm trees and fruits on a large scale.

What's more interesting is that these macaques could serve as an alternative to the use of harmful pesticides, commonly used as conventional means in dealing with crop-damaging rodents.

Dr. Nadine Ruppert, a senior lecturer and primate researcher at the Universiti Sains Malaysia (USM) School of Biological Sciences said, results from research done with her team indicated that apart from owls, macaques too are good rat-catchers.

She said that, macaques and owls in fact complement each other, as the former would hunt for rats in daytime, climbing up trees and hunting rats that sleep behind the branches and fronds. Owls on the other hand would hunt at night for rats that scurry the ground.

"We, as researchers, were thrilled with these findings and would like to promote greater awareness to all in caring for our tropical rainforest more carefully, as it serves as a natural habitat that would support the living ways of these primates which are being threatened," she said at a media conference recently. Also present was her fellow researcher from the School of Biological Sciences, Professor Dr. Shahrul Anuar Mohd Sah.

Nadine said that the research also showed strong evidence of habitat conservation activities around palm oil plantations. By allowing the macaques to continue living amongst the oil palms, it would not only protect the threatened species and other forest-dwellers, but it could also bring greater economic benefits to the farmers.

She added that, data from the study showed the percentage of the primates damaging the production of palm oil is much lower at around 0.6 percent, compared to rats which could damage and reduce palm oil yields by up to 10 percent for each plantation.

Nadine and her team have spent a period of close to five years to study this primate through a project known as the Macaca Nemestrina Project.

In addition, macaques are among the protected species which are shy in nature and are non-threatening to humans when allowed to live freely within their groups in the jungle.

Other than in Malaysia, this group of primates, with brownish fur and a short tail, could be commonly found in Indonesia, Thailand, Bangladesh and India, among others.

For the record, the research has been uploaded online at https://www.cell.com/current-biology/pdf/S0960-9822 (19)31171-6.pdf earlier this week, and as been viewed over 80 million people worldwide.