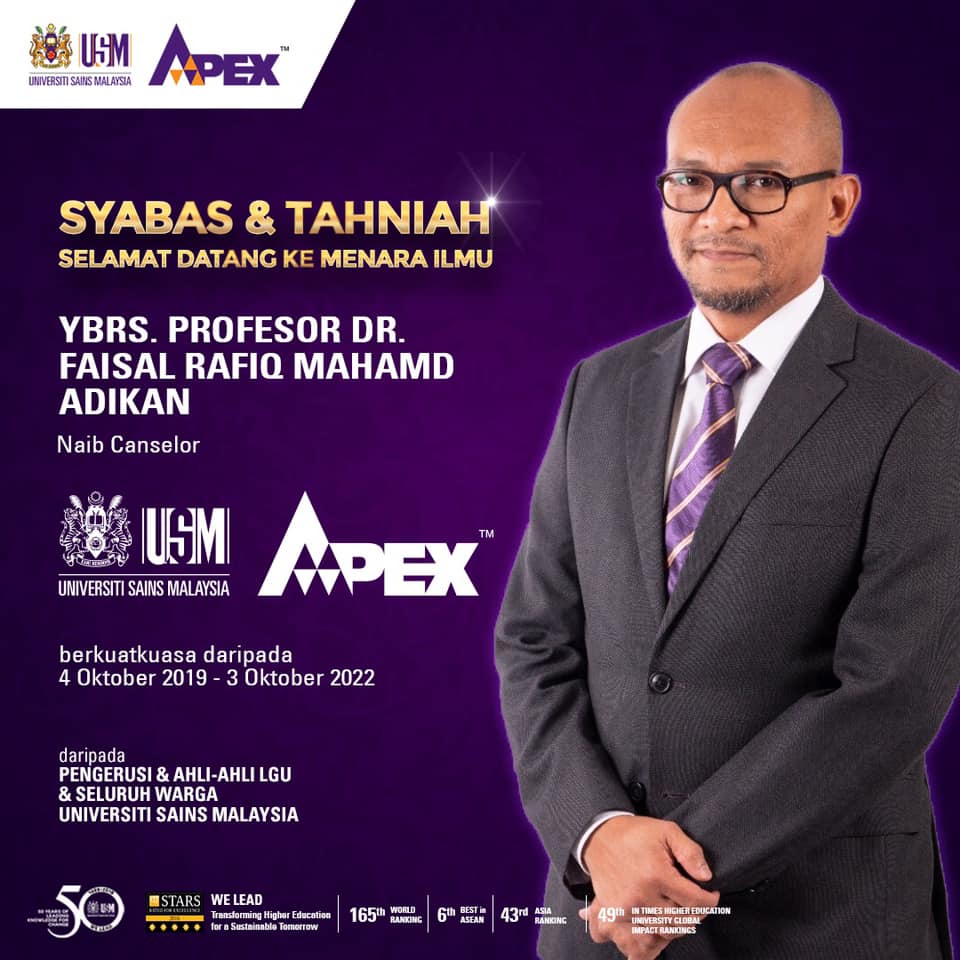 USM PENANG, 4 October 2019 – Universiti Sains Malaysia (USM) would like to announce that the Ministry of Education Malaysia has appointed Professor Dr. Faisal Rafiq Mahamd Adikan as its new Vice-Chancellor effective from 4 October 2019 until 3 October 2022.

The appointment was based on the recommendation of the Public Universities Selection Committee that appoints vice-chancellors in public universities, chaired by Tan Sri Zarinah Anwar and with members including Tan Sri Wahid Omar, Tan Sri Dato' Dr. Lin-See Yan, Dato’ Prof. Dr. Mohamad Abdul Razak and Dr. Andrew Aeria. Others on the panel are the Chairman of the USM Board of Governors and two representatives of the USM Senate.

Faisal Rafiq’s appointment was also based on his knowledge, expertise, experience and achievements while holding the post of Deputy Vice-Chancellor (Development) at the Universiti Malaya (UM) for 6 years, and his previous service in various capacities at the national and international level.

At UM, he was part of the top management responsible in ensuring excellence and visibility of UM at the global stage with the university being positioned at #70 in the Top 100 QS World University Rankings 2020. UM is also placed in the Top 10 among global universities in the field of Engineering.

While holding the position of Deputy Vice-Chancellor (Development), his innovations in waste and water management, research and education for sustainable development led the university receiving the recognition as the Most Sustainable (Greenest) City Centre University in Asia from the Universitas Indonesia Green Metric Index in 2017 and 2018.

He has also been involved in the commercialisation of products through his spin-off company, Flexilicate Sdn. Bhd.

The ministry believes he will be able to drive USM's standard of excellence to a higher level.

The ministry also hopes that his appointment would see him continuing his achievements and contributions in making USM a leading research university globally.

It also congratulated outgoing USM Vice-Chancellor Professor Datuk Dr. Asma Ismail who will now take on a bigger role as chairman of the Malaysian Qualifications Agency (MQA) and the fifth president of the Academy of Sciences Malaysia (ASM).