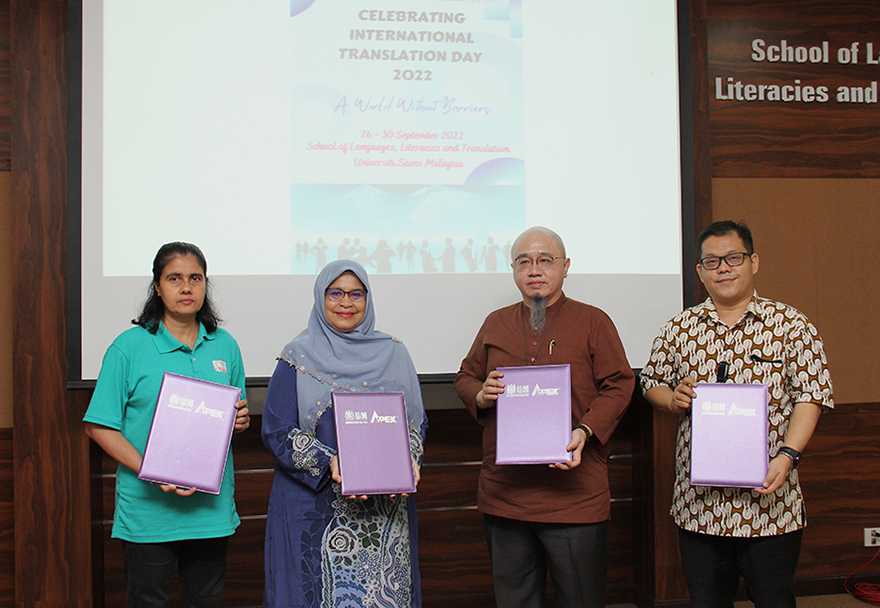 The USM Deputy Vice-Chancellor Research and Innovation, Professor Dr. Ir. Abdul Rahman Mohamed, who attended the ceremony representing the USM Vice-Chancellor said he is well pleased to see these young lecturers taking the initiative to organise a programme that would help bring science to life to boost school students’ interest in science, technology, engineering and mathematics (STEM).

“I hope too that among the students who took part in the challenge, there will be a recipient of the Nobel Prize Award in the future.

“Furthermore, I also would like to see this kind of competition to be continued to produce students who would be ‘feeders’ to go into the science stream at the Form 6, undergraduate or postgraduate level,” he added.

He congratulated the organising committee led by Dr. Nethia Mohana Kumaran, a senior lecturer at the School of Biological Sciences, and all members of the committee, as well as partners who supported the programme such as Exxon Mobil, Ministry of Education, Ministry of Energy, Technology, Science, Climate Change and Environment; Sasbadi Online, Majlis Amanah Rakyat (MARA) and Japan Science and Technology Agency.

“It certainly has encouraged us to improve our performance today, in addition to our science knowledge and we are happy that our hard work has paid off,” said one of the members from the winning team from PCGHS.

The accompanying teacher said that it was not difficult to select the team members to represent the school because three of them volunteered to join due to their keen interest in science.

“Other than that, it is also because of knowing that the Grand Prize winner of the challenge will have the opportunity to go for a Study Tour to Stockholm, Sweden and to witness the prestigious Nobel Prize Award Ceremony, held there each year on December 10th. Congratulations to the PCGHS team and also the teachers who have contributed and supported the team,” he added.

As the winner, PCGHS will represent the state of Penang to compete against the winners from other states for a place in the Grand Final on 30th August.

The National Science Challenge (NSC) is organised by the Young Scientist Network (YSN), under the Academy of Sciences Malaysia (ASM) and in collaboration with Penang State Education Department, as part of the initiative to instill passion among school students in STEM.

The NSC this year also saw the involvement of Dr. Siti Khayriyyah Mohd Hanafiah, who was recently acknowledged as the ‘World’s Best Science Communicator’ and was invited to give a talk on science to the students. She represented the young lecturers from the USM School of Biological Sciences and also a member of Young Scientist Network (YSN).